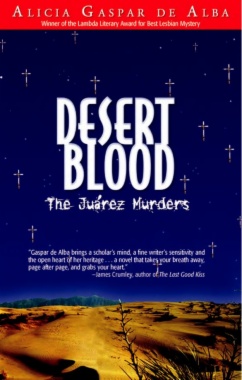 It’s the summer of 1998 and for five years over a hundred mangled and desecrated bodies have been found dumped in the Chihuahua desert outside of Juárez, México, just across the river from El Paso, Texas. The perpetrators of the ever-rising number of violent deaths target poor young women, terrifying inhabitants on both sides of the border.
El Paso native Ivon Villa has returned to her hometown to adopt the baby of Cecilia, a pregnant maquiladora worker in Juárez. When Cecilia turns up strangled and disemboweled in the desert, Ivon is thrown into the churning chaos of abuse and murder. Even as the rapes and killings of “girls from the south” continue—their tragic stories written in desert blood—a conspiracy covers up the crimes that implicate everyone from the Maquiladora Association to the Border Patrol.
When Ivon’s younger sister gets kidnapped in Juárez, Ivon knows that it’s up to her to find her sister, whatever it takes. Despite the sharp warnings she gets from family, friends, and nervous officials, Ivon’s investigation moves her deeper and deeper into the labyrinth of silence.
From acclaimed poet and prose-writer Alicia Gaspar de Alba, Desert Blood is a gripping thriller that ponders the effects of patriarchy, gender identity, border culture, transnationalism, and globalization on an international crisis.