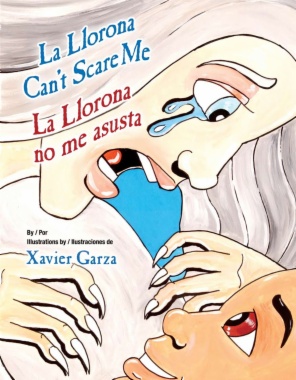 La Llorona Can't Scare Me = La llorona no me asusta

Little Damian is getting ready for bed, and the spooky monster called La Llorona is hollering up a storm outside his bedroom window. But he’s not afraid. “You can’t scare me, silly Llorona,” says Damian, “and neither can your monster friends!” When evil-looking witch owls fly around his room and little green duendes, or goblins, make creepy noises under his bed, he’s still not frightened. Not even a little bit. The Donkey Lady, a chupacabras and even some little devils parade through his room, but Damian still isn’t afraid. A witch casting spells, a ghost rattling its chains, a cucuy with a burlap bag to catch him … nada. None of them can terrify brave little Damian. How can a little boy like him be so fearless?!? No one knows it, but Damian has a secret weapon: a night light shaped like a mighty wrestler wearing a silver mask. When he plugs it in, its bright light terrifies all the monsters and sends them running for a place to hide! Touching on issues such as bedtime rituals and nighttime terrors, children ages 4-8 will enjoy this entertaining story that features creepy creatures familiar to many Hispanic kids. Bilingual edition
Back