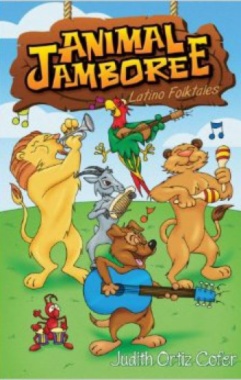 Once upon a time, a lion and a lioness lived in a forest at the edge of a field. They think they are better than all their neighbors, even though the other animalshorses, burros, cats, cows and even a goatarent starving like the lions. But the lion has a brilliant idea to end the rumbling in their stomachs: they will invite all their neighbors to a grand fiesta full of music and dancing. And while everyone is dancing, theyll lure the goat away and push him into a cauldron of boiling water. But the arrogant lions plan goes wildly awry when the goats suspicious friends help him escape!
An assortment of animals parade through these entertaining tales. In A Funeral for Nangato, a village of naïve, proverb-quoting mice decide to bury their enemy, the cat Nangato, who deserves a proper funeral because one should be good to those who treat you badly. But just because all the mice say Nangato is dead doesnt mean he is! And in The Brave Little Ant and El Señor Chivo, a tiny ant helps an old couple save their garden from a bad-tempered goat who is determined to eat them out of house and home. Even though the ant is small, she still manages to save the vegetables and the day!
Adapted by celebrated author Judith Ortiz Cofer, these Puerto Rican folktales will delight young readers ages 8  12, whether theyre reading alone or with their favorite adult. Available in both English and Spanish, these stories featuring a variety of animals share lessons that will appeal to kids who enjoy animals and storytelling!