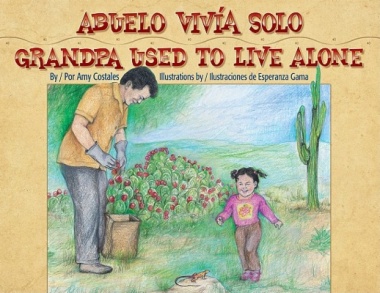 Grandpa used to live alone in a quiet pink house. But when his granddaughter was born, everything changed: Mamá and I moved in. Grandpas house was still pink, but it was not so quiet anymore.
And Grandpas house and garden werent as orderly either. Sometimes Grandpa had to pick his way through toys strewn across the floor. Other days he watched her pluck rose buds and beans from his plants. And some days his brick patio was decorated with brightly colored chalk.
While she was a little girl and her mother went to school late in the evening, Grandpa made rice pudding. She would play with the measuring cups and eat raisins while he prepared their bedtime snack and told her stories. Then he would carry her upstairs to her crib and tuck her in. He would rock in the chair by her crib until she went to sleep.
As the years pass, she grew and grew. Grandpa took down her crib and bought her a bed. He taught her how to make rice pudding and play catch. And while she was growing, Grandpa was growing older too. Until all too soon, she was the one making the rice pudding and helping her grandfather up the stairs to bed.
Amy Costales heart-warming text, accompanied by Esperanza Gamas soothing illustrations, lovingly depicts the relationship between a child and a central figure in her lifeher grandfather.