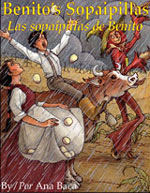 Everyone loves the taste of the puffed pillows of fried bread known as sopaipillas, whether theyre drizzled with honey or sprinkled with cinnamon and sugar. But most people, young Cristina included, dont know about this Southwestern treats magical origins, or how it got its name.
One hot summer morning, Cristinas abuelita promises to teach her how to make the tasty fried bread and explain how she knows that making sopaipillas will bring rain! Long ago, Cristinas great-grandfather Benito was desperate. His crops were dying because it hadnt rained for months. One day, exhausted and weak from working the fields, Benito watched in amazement as a scarecrow came to life and begged him to help bring rain. The worried scarecrow claimed to know how. But could a scarecrowand pieces of doughreally bring rain to the dry and dusty fields? Could Benito really save everyones crops?
And so Benitoand many years later his great-granddaughter Cristinalearned about the pillows of bread known as soup catchers that, like clouds, catch rain drops and bring them down to earth.
Benitos Sopaipillas / Las sopaipillas de Benito is a magical bilingual picture book for children aged 3-7 that celebrates a delicious staple of Southwestern cuisine. And for those children who want to test the magic of the sopaipillas, a recipe is included in English and Spanish.