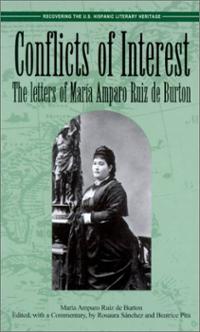 "María Amparo Ruiz de Burton, the recently discovered nineteenth-century novelist, broke many of the boundaries that circumscribed the life of both women and Hispanics in the southwestern territories of the United States. Not only was she the first Hispanic novelist to write English, but her courage and resolve took her into the circles of governmental and financial power where very few women had tread before.
Conflicts of Interest captures the conflicted personality of María Amparo Ruiz de Burton, a woman pulled in different directions by tensions of class, race, gender, and nationality. The trajectory of Ruiz de Burtons life through her correspondence makes for a compelling and revealing narrative, one that brings to life the evolution of discourse and culture in the Southwest as it was becoming integrated in the United Statesa process which, some might argue, continues today.
This volume is as complete a collection of the Ruiz de Burton letters as is possible, given the imperfect historical record. Included are various personal and business documents and a collection of articles about her family. Among her correspondents were such important historical figures as Samuel L. M. Barlow, E. W. Morse, Prudenciana Moreno, and Platón Vallejo. But this album is not a simple collection of letters and documents