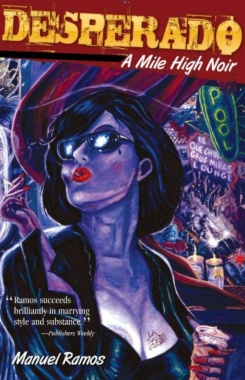 Gus Corral can’t quite believe it when an old high school buddy he hasn’t seen in years asks him for help.  Artie Baca looks as cool as ever; the hippest guy in high school now looks like a GQ cover boy, Chicano style. And like always, Artie has women problems, even though he’s married. He’s being blackmailed because of an imprudent fling—caught on video, of course. Artie has a prosperous real estate business and can afford to pay off the young girl, but he’ll reward Gus handsomely for his help in convincing her that there won’t be any future payments.

Gus’s life hasn’t been as successful; he manages his ex-wife’s second hand shop after losing his job in the recession and claims to also work as the night watchman so he can live there too. He can really use the money Artie is offering and agrees to help, even though he knows Artie probably deserves the shake down.

But before Gus can deliver the money, Artie is dead and the police want to know why the deceased was carrying a check made out to his old high school chum. And when an armed stranger breaks into the shop in the dead of night, Gus knows there’s more to the situation than meets the eye. An investigation into Artie’s involvement in the gentrification of Denver’s north side leads to harrowing encounters with dangerous criminals, both from the area and south of the border. Suddenly Gus is ensnared in the theft of one of the most revered religious symbols in the Catholic Latino world, a cloak bearing the image of the Virgen de Guadalupe. He's caught between warring gangs, and soon he and the people he cares about most are in a life-and-death predicament.