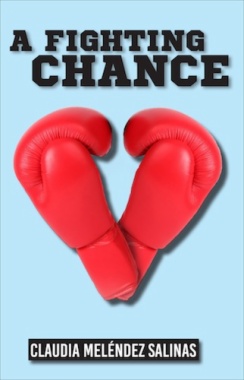 Seventeen-year-old Miguel Angel spends every minute after school at the Packing Shed, working out with the Alisal Boxing Club. He dreams of becoming a champion so he can get his mother and five siblings out of their cramped one-bedroom apartment in one of Salinas’ poorest barrios.
But suddenly his life gets more complicated. The city is threatening to take the Packing Shed away from Coach, and without a place to train he won’t be able to avoid the gangbangers in his neighborhood. His childhood friend, Beto, has succumbed to the wiles of easy money and expensive cars, and Miguel Angel wonders if he’ll be able to resist his friend. Meanwhile, beautiful blonde Britney from Pebble Beach has entered his life, and Miguel Angel has never felt this way before. She too feels an overwhelming attraction, and she’s willing to defy her hard-nosed father, who expects her to date someone from their social background of exclusive country clubs and Ivy League schools.
When Beto turns to him for help, Miguel Angel is torn between his commitment to friends and Coach’s warnings about gang life. With gang violence getting closer and closer, he and Britney are suddenly faced with the consequences of unprotected sex. Can their love for each other survive all of the problems swirling around them? In A Fighting Chance, journalist Claudia Meléndez Salinas has crafted a vivid novel for young adults that captures the challenges of contemporary urban life in one of the Latino community’s poorest barrios.