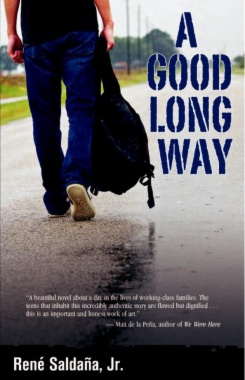 "Stop it. The two of you, stop it! You're father and son; you should love each other." Roelito howls at his father and older brother as their heated argument turns into a pushing, shoving match. Beto has again come home way past curfew, and worse, smelling like a cantina.
When Beto Sr. tells his son that he either needs to follow the rules or leave, the boy—a senior in high school and a man as far as he's concerned—decides to leave, right then, in the middle of the night. Once he has walked away, though, he realizes he has nowhere to go. Maybe his best friend Jessy—a hard-as-nails girl who has run away before—can help him.
The story of Beto’s decision to run away and drop out of school is told from shifting perspectives in which the conflicted lives of Roel, Beto, and Jessy are revealed in short, poignant scenes that reflect teen-age life along the Texas-Mexico border.
Each one has a good long way to go in growing up. Roel fights against the teachers’ assumptions that he’s like Beto. Unlike his big brother, Roel is book smart and actually enjoys school. Jessy is smart too, but most of her teachers can’t see beyond her tough-girl façade. Her parents are so busy fighting with each other that they don’t notice her, even if she’s packing a suitcase to leave. And Beto … somewhere along the way he quit caring about school. And his teachers have noticed and given up too.
Author and educator René Saldaña, Jr. once again writes a fast-paced, thought-provoking novel that will engage young adults in questions about their own lives and responsibilities to family, friends, and most of all, to themselves.