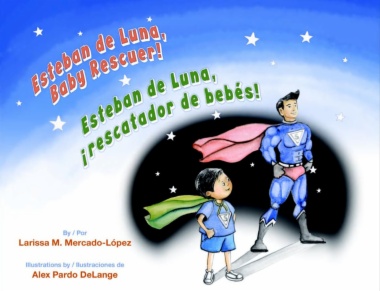 Just then his mother tells him that they’re going to the park, so Esteban puts his cape back on. At the park, he sees a baby doll on the swings. Suddenly a storm blows in, and Esteban’s mom calls him to run home. If Esteban leaves the doll, it will get wet and dirty. So he wraps the doll in his cape and ties it back on. “Don’t worry, baby! I’ll save you!”

On the way home he jumps over puddles and walks under awnings to keep the baby dry. At home, he wears the doll in his cape as he plays and does his chores. That night—with the baby clean and dry—the boy feels like a superhero. He will not sell the cape after all. “From now on, I am Esteban de Luna, Baby Rescuer!”

With whimsical illustrations by Alex Pardo DeLange that depict a kind and compassionate boy, this charming bilingual picture book for children ages 4 – 8 will generate dialogue about what it means to be a boy while broadening the definition of masculinity to include tenderness and caring.