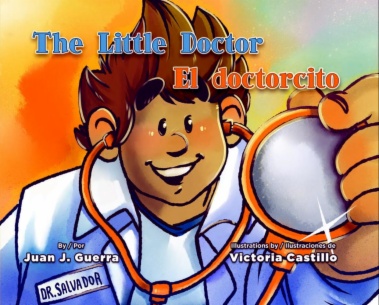 Salvador raced home from school to share exciting news with his abuela: he made an A+ on his science test! But at home, he learns that his grandmother needs his help. She is going to the doctor and wants her grandson to interpret for her. Abuela is nervous because she has never been to a doctor in the United States. In El Salvador, she either saw a curandera or drank té de manzanilla when she felt sick.

When he learns that none of the physicians speak Spanish, the boy realizes that he is completely responsible for making sure the doctor understands his grandmother—and that she understands his instructions! But in spite of his help, the visit does not go well. The doctor rushes in and out. He doesn’t listen to Abuela. And he tells Salvador that she should not eat so much Mexican food! Abuela is so upset that she threatens not to take the medication the doctor prescribes! What can Salvador do to help her?

In this engaging bilingual picture book for children ages 4-8, a young Salvadoran boy dreams of becoming a doctor who speaks both English and Spanish so that patients like his beloved grandmother aren’t afraid to visit the doctor. Paired with lively, colorful illustrations by Victoria Castillo, this book will encourage children to think about their own futures as well as the role their culture can play in helping the community.