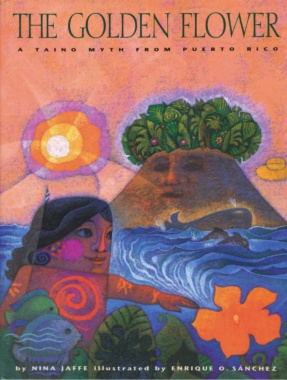 The golden flower : A Taíno myth from Puerto Rico

The syncopated prose of Nina Jaffe draws the reader to the island of Puerto Rico, back before the Spaniards arrived. The island was inhabited by the Taínos, and they called their beloved island, Boriquén. This is their story of how Boriquén came to be.
In the beginning, there is only a giant mountain above a dry plain without water or plants. When a child walks over the flat land below the mountain, he finds seeds dancing in the wind. When he plants the seeds on the top of the mountain, a forest grows on the crest and in that forest, a large golden flower appears. Soon, the boy and his community reap benefits that they had never before imagined.
A joyful creation myth about the evolution of a beautiful island habitat, this picture book, originally published by Simon & Schuster, is also a celebration of the young boys quest, which encourages young readers, ages 4-8, to respect the gifts of the winds and the cycle of nature that bears fruit for the whole community.
Jaffes adaptation of this traditional folktale common to indigenous peoples of South America and the Caribbean stemmed from her encounter with a Spanish-language text by Carmen Puigdollers, Como se formó la bella isla de Boriquén, and research in Puerto Rico.