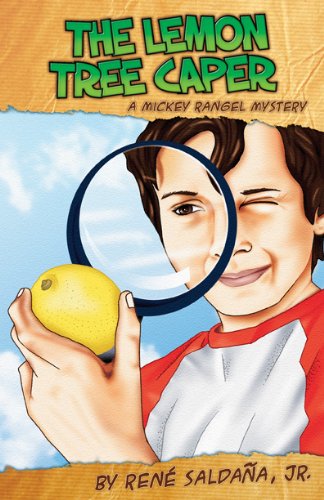 Mickey Rangel, kid detective extraordinaire, has just exited the school bus one sweltering afternoon when he hears a blood-curdling shriek. Its coming from the creepy neighbor ladys house. Señorita Andrade, known as La Bruja Andrade to all the neighborhood kids, is as old as the moon, wrinkled like a prune, and smells like moth balls. But shes in trouble, so Mickey forgoes the cool, refreshing glass of lemonade he planned to buy from Tinas stand and instead goes to help the supposed witch.
My lemons, Mickey, my prize-winning lemons. Theyre gone. Theyre all gone, Señorita Andrade cries. The tree was covered with fruit just that morning, but Mickey can see that its true: theres not one lemon on the tree. She is famous for her lemons. One of the reasons everyone thinks the woman is a witch is because she somehow manages to keep lemons on the tree year round. And for years she has won first prize in the annual Lemon Festival and Lowrider Bicycle Show. In the lemon category that is, not the bikes.
Who could have removed several sacks full of lemons? Was it only a coincidence that Tina had set up a lemonade stand just down the street? With a bowl full of lemons sitting right out front?!? Or could it have been someone trying to sabotage Señorita Andrades entry in the upcoming festival dedicated to the savory fruit? Ill get to the bottom of this, maam. Mickey Rangel is on the case.
In this second bilingual book in The Mickey Rangel Mystery series for intermediate readers, author and educator René Saldaña, Jr. has crafted another engaging book for kids, and his wise-cracking, smart protagonist will appeal to even the most reluctant readers.