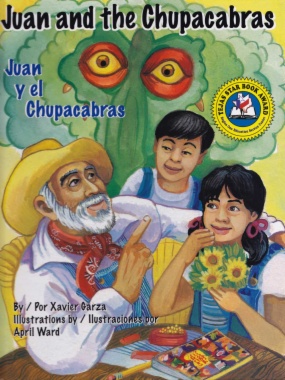 The beast had dark green skin and glowing red eyes that were the size of two baseballs, Abuelo tells his wide-eyed grandchildren. According to Abuelo, a creature called the Chupacabras lurks in the fields looking for fresh victims.
Young Juan and his cousin Luz savor Abuelos hair-raising stories. He tells the children of defeating terrifying fiends like the Chupacabras and La Llorona. The children cling to every word as he describes his brave stand-off with the Chupacabras, a terrifying beast with wings, claws and sharp fangs.
But yet they wonder if theres more to his strange story than meets the eye. Plucky Luz hatches a plan to either disprove Abuelos tale or hunt down the menacing monster and put an end to it once and for all. Armed with a bag of marbles dipped in holy water and a sling shot, the children venture into a cornfield one moonless night in search of the truth.
Just like Chupacabrass thirst for blood and the childrens appetite for Abuelos stories, young readers aged 3-7 will devour the pages of this exciting picture book that transmits the storytelling traditions of the Mexican-American community from one generation to the next. Bilingual edition