The Adventures of Don Chipote, or, When parrots breast-feed 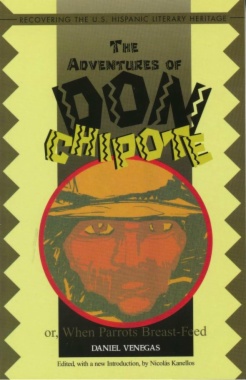 Originally published in 1928, and written by journalist Daniel Venegas, Las aventuras de Don Chipote is an unknown classic of American literature, dealing with the phenomenon that has made this nation great: immigration. It is the bittersweet tale of a greenhorn who abandons his plot of land (and a shack full of children) in Mexico to come to the United States and sweep the gold up from the streets. Together with his faithful companions, a tramp named Policarpo and a dog called Skinenbones. Don Chipote (whose name means bump on the head) stumbles from one misadventure to another.
Along the way, we learn what the Southwest was like during the 1920s: how Mexican laborers were treated like beasts of burden, and how they became targets for every shyster and lowlife looking to make a quick buck. The author, himself a former immigrant laborer, spins his tale using the Chicano vernacular of the time. Full of folklore and local color, Don Chipote is a must-read for scholars, students, and all who would become acquainted with the historical and economic roots, as well as with the humor, of the Southwestern Hispanic community.