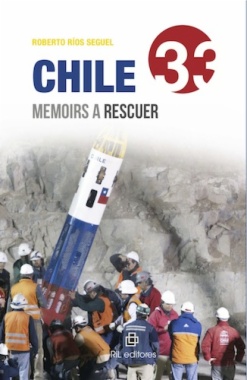 The titanic task demanded such character and moral courage from the naval staff in general, and Lieutenant Rios in particular, to allow them to face the challenge successfully. Naval rescuers Rios and Roblero?s spirit and their proactive attitude were quickly appreciated and assessed not only by myself, but also everyone who witnessed their conduct during the demanding and arduous training to which they were subjected by the rescuers? team leader, Ovidio Rodriguez, Codelco; as well as their professional work with the miners 620 meters deep. // Finally, such qualities and performance in the rescue would make naval rescuer Rios worthy of the Medal of Bravery awarded by the President of the Republic, in Valparaiso, on May 21st, 2011. While reading the book Chile 33: Memories of a Rescuer by Lieutenant Roberto Rios Seguel, you will get to know both the man and the spirit of service to the institution he belongs to and surely you will share in my satisfaction of having met him.