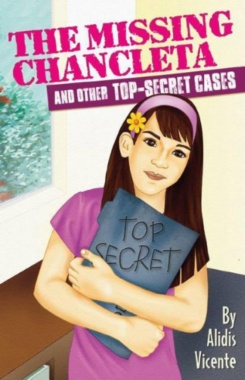 Flaca’s chancleta, or flip flop, has gone missing! She prepares to investigate the theft: “Pencil and notepad: in hand. Straw hat for disguise: on. Magnifying glass: Check.” She interviews each of her family members, all of whom are suspects. Oddly, their stories check out, so Flaca will have to dig deeper to find the culprit.

Normally, Detective Flaca a pale, scrawny second grader doesn’t allow civilians to read her confidential case files. But young readers willing to sign the confidentiality agreement that appears before the three top-secret cases included in this bilingual collection are in luck!

In “The Case of the Missing China,” Flaca discovers small pieces of china or oranges for those who grew up in Puerto Rico in a fruit cup included in her lunch. She’s allergic to oranges, so she immediately suspects someone is trying to harm her. But who could it be? And in “The Case of the Lost Salsa,” Flaca is dismayed to learn she will have to dance salsa at her older sister’s quinceanera. Attending the birthday party is bad enough, but performing in front of everyone is unimaginable! When Flaca starts dance lessons, she realizes her “salsa” is missing. She uses her finely tuned detective skills to locate her lost dancing abilities, ultimately discovering that one’s inner “salsa” can’t be found with pencil and paper.