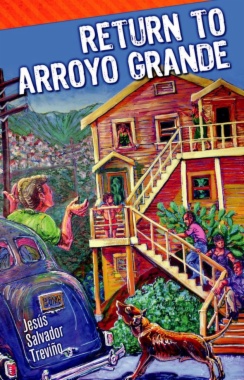 In the opening piece, “Where Lost Things Reside,” rumor has it that Old Man Baldemar has died. Stories about the old geezer’s demise abound: he died of pneumonia; he was hit by a car, even killed by the big C. All Yoli Mendoza knows is that she’s lost the income from helping the perverse recluse with his grocery shopping. Entering the house she has never been allowed in before, she’s shocked to find it’s much larger than it appears from the street. And even odder, it’s full of items, each tagged with a name, city and date. There’s a room full of cell phones, drawers packed with rings, trays and trays of plastic lids … socks, watches, wallets, glasses! Was Baldemar the caretaker of all of the things that have been lost, no matter the time, city or even country?
Weird things continue to happen to the characters that renowned author and filmmaker Jesús Salvador Treviño introduced in his captivating debut, The Fabulous Sinkhole and Other Stories. At the theme park where Choo Choo Torres works, people begin to disappear—and then reappear slightly changed; are they moving back and forth between alternate universes? Charlie Villalobos keeps blacking out and losing days; could it be that he exists only in someone’s dreams? And Jeannie de la Cruz has very distinct memories of seeing her partner Gale run over by a speeding taxi in Mexico City; how can she still be alive?
Many in these interrelated stories have left Arroyo Grande to follow their dreams, but in the raucous title story they all return to their hometown in a resounding affirmation of the power of community. Weaving magical realism with issues of loss, memory and identity, Jesús Salvador Treviño once again confirms his place as a powerful storyteller in Chicano—and American—literature.
“Fabulous Sinkhole is a collection of stories set primarily in Arroyo Grande, Texas, and each one is connected with the title story by a theme of accident versus coincidence. All of them contain lively, accessible language and demonstrate the author's very gifted sense for storytelling." —Booklist on The Fabulous Sinkhole and Other Stories (starred review)