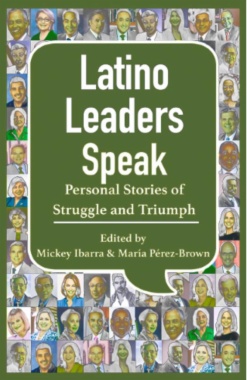 “People do not define you,” Soledad O’Brien’s Cuban mother repeatedly told her children. “You define yourself.” And so this mixed-race, first-generation Latina American would go on to succeed in her field, ultimately becoming an anchor for CNN. O’Brien’s remarks, like the others included in this volume, reflect on what it means to be Latino in the United States. For her, “It’s succeeding, fulfilling the dream and then turning around and grabbing everybody else and making it happen for them too.”

The importance of education is a common refrain in the lives of the leaders represented here. Many reference one particular teacher or mentor who made a difference. The late Reverend Father Virgilio Elizondo, a professor at the University of Notre Dame, said his fifth-grade teacher changed his life. She taught him to love school and learning. Others remember the sacrifices made by parents so that their children could have more opportunities for a better life. In all, these writings are both a testament to perseverance and a guide to life, for readers of all backgrounds.

Originally presented at the Latino Leaders Luncheon Series in Washington, DC, and other major cities, the personal stories included in this book are all by successful Latinos involved in a variety of occupations, from politics and sports to education and activism. Contributors include former Los Angeles Mayor Antonio Villaraigosa; former general manager of the New York Mets, Omar Minaya; and Dr. Francisco G. Cigarroa, the Chancellor of the University of Texas System. Their words will inspire readers of all ages to follow their dreams and help those less fortunate.