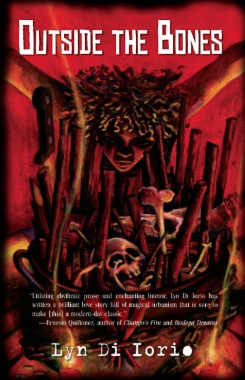 Fina is a big girl with a big mouth. She's the neighborhood bruja, or spirit worker as she likes to call herself, casting spells for her neighbors in Manhattan's Upper West Side. She can't believe it, though, when she puts an accidental fufu or spell on Chico, the irresistible trumpet player who lives upstairs. "With so many scraps of his clothing . . . sprinkled with blood, gunpowder, sugar, spit, and God knows what else, poor Chico's body didn't know if it was being cursed or blessed."

Chico recovers just as two women from his past turn up: his former beauty-queen lover and an attractive young woman claiming to be his long-dead daughter. Fina is not pleased. So she visits her mentor, Tata Victor Tumba Fuego, Master of Fire. He specializes in Palo Monte, the Afro-Caribbean magical art of controlling and manipulating spirits housed in cauldrons. The Ancient One, the oldest spirit working for Victor, wants a blood sacrifice from Fina, something she has managed to avoid. "We ain't on the island no more, we don't sacrifice in the mountains of Africa or Cuba; we do it in our apartments." But she needs help, so she'll do what it takes. All too soon she finds herself involved with a spirit whose quest for revenge can't be stopped.

Weaving Afro-Caribbean witchcraft rituals with the sixteen-year-old mystery of a woman's disappearance, Outside the Bones is an erotically charged ghost story set in both present-day New York and Puerto Rico. Following in the tradition of Anne Rice, Lyn Di Iorio's brilliant debut novel takes a mesmerizing look at issues of race, class, power and greed.