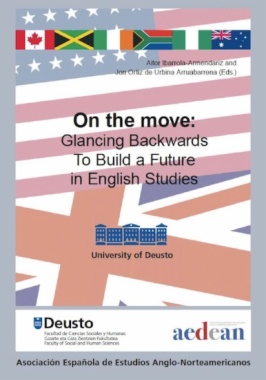 On the move : Glancing Backwards To Build a Future in English Studies

This volume brings together a selection of the papers and round tables delivered at the 39th AEDEAN Conference, held at the University of Deusto in November 2015. The essays in On the Move: Glancing Backwards to Build a Future in English Studies often begin with typically-academic gestures such as retrieving a classic text and finding new ways of studying its genre or characterization; or remarking how certain ungrammatical constructions have gone frequently unnoticed —even in well-known texts— for various reasons; or entangling oneself in contentions about the adequacy of dissecting a literary text or linguistic problem by using innovative analytical tools. In all cases, though, there is the intention of putting forth certain views and notions that will help future scholars to deal in a better light with the dilemmas regularly encountered in literary, linguistic and cultural studies. The book opens with three essays by professors Bartholomae, Pullum and Río, who demonstrate not only their mastery in their respective subjects but also their ability to tailor their contents to multifarious audiences. The next two sections represent the main body of the e-book, with nearly forty contributions on both literature and cultural studies (Part II) and language and linguistics (Part III). These short academic pieces are a representative showcase of the research being done lately in the different areas of expertise. The last section of the volume gathers together the results of four research projects dealing with such engaging topics as postcolonial crime fiction or forgotten texts by Anglo writers about the Spanish Civil War. It is hard to think of any potential reader schooled in English Studies who will not find something suitable to their interests and tastes in this volume.