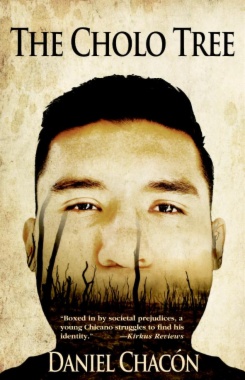 “Do you know what a stereotype you are?” Jessica asks her son. “You’re the existential Chicano.” Fourteen-year-old Victor has just been released from the hospital; his chest is wrapped in bandages and his arm is in a sling. He has barely survived being shot, and his mother accuses him of being a cholo, something he denies.

She’s not the only adult that thinks he’s a gangbanger. His sociology teacher once sent him to a teach-in on gang violence. Victor’s philosophy is that everyone is racist. “They see a brown kid, they see a banger.” Even other kids think he’s in a gang, maybe because of the clothes he wears. The truth is, he loves death (metal, that is), reading books, drawing, the cartoonist Lalo Alcaraz and the Showtime series Weeds. He likes school and cooking. He knows what a double negative is!

But he can’t convince his mom that he’s not in a gang. And in spite of a genius girlfriend and an art teacher who mentors and encourages him to apply to art schools, Victor can’t seem to overcome society’s expectations for him.

In this compelling novel, renowned Chicano writer Daniel Chacón once again explores art, death, ethnicity and racism. Are Chicanos meant for meth houses instead of art schools? Are talented Chicanos never destined to study in Paris?